Since irrigation maps have not been available, and the Corine 2000 land cover database for Europe also did not cover this region yet, it was decided to distribute irrigated land to areas extracted from the GLC2000 regional product for Europe [RS07] and classified there as „cultivated and managed“.

Distribution of irrigated area in Serbia (including Kosovo) by Main Region and District: 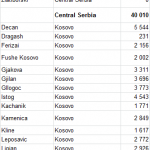