Fewer persons in employment than a year before

According to the Statistical Office of Slovenia, the number of active persons (i.e. employed and unemployed) decreased by about 5,800 in 2011 and reached 938,802. On 1 January 2012 employed persons represented just under 88% of all active persons
(about half a percentage point less than a year earlier).

On 1 January 2012, 28% of citizens of Slovenia had basic or lower education, 53% had upper secondary education, and 19% had tertiary education, which is very similar to the education structure of this population group from one year earlier.

More than a third of pension recipients had basic education. Due to a specific age-sex structure of this group (more women live to old age), there were more women with basic or lower education (54%) than men (fewer than 30%). The smallest gap between sexes was recorded among retired persons with tertiary education, but they were quite few (about 10%) and were mostly less than 70 years old. 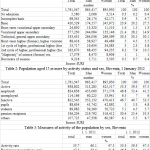